Research activity in the development of a novel ellipse detection method which is able to run in real time on mobile devices. This method provides a major speedup with regard to other state-of-the-art approaches, while achieving comparable (or even better) detection accuracy.

In the field of mobile vision (the application of computer vision algorithms to mobile device) this research activity aims at developing fast AND accurate ellipse detection to be usable as a first step for several other steps. In particular, the motivation of ellipse detection can be based on the application of bicycle recognition and classification, as a first fundamental step for finding the bicycle wheels. The implementation on mobile devices poses several scientific challenges, including the limited computational and memory resources, the ever-moving camera, as well as its low resolution, the energy consumption to save battery. The developed system is capable to detect ellipses in complex real images very fast (15 msec on a standard commercial smartphone) and with a considerable accuracy. The tradeoff between efficiency and accuracy has resulted to be the best among the existing methods for ellipse detection. 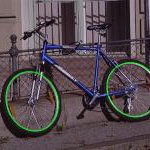