Stray dog populations represent a serious concern for human beings health and safety and for dogs themselves in many European countries [1]. The main population control action plan in Italy, but also in other countries, is the confinement of stray dogs in shelter facilities until re-homing. Unfortunately, the impairment between entrance and adoption rates often leads to an overcrowded scenario where dogs are likely to spend most part of their lives. We propose a computer vision system for the evaluation of the behaviour and the well-being of the dogs housed in these shelters.

Despite pattern recognition methods for human behavioral analysis has flourished in the last decade, animal behavioral analysis has been almost neglected. Those few approaches are mostly focused on preserving livestock economic value while attention on the welfare of companion animals, like dogs, is now emerging as a social need. In this work, following the analogy with human behavior recognition, we propose a system for recognizing body parts of dogs kept in pens. We decide to adopt both 2D and 3D features in order to obtain a rich description of the dog model. Images are acquired using the Microsoft Kinect to capture the depth map images of the dog. Upon depth maps a Structural Support Vector Machine (SSVM) is employed to identify the body parts using both 3D features and 2D images. The proposal relies on a kernelized discriminative structural classificator specifically tailored for dogs independently from the size and breed. The classification is performed in an online fashion using the LaRank optimization technique to obtaining real time performances. Promising results have emerged during the experimental evaluation carried out at a dog shelter, managed by IZSAM, in Teramo, Italy. 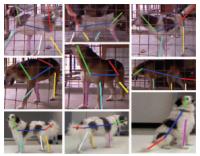