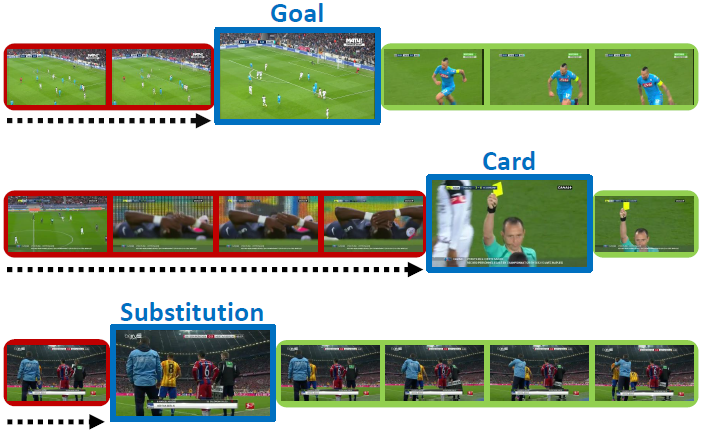 We train and evaluate the proposed method on the SoccerNet dataset. SoccerNet gathers 500 full broadcast soccer matches, spanning 764 hours of video, which are split into 300 games for training, 100 for validation, and 100 for testing. Interesting events belong to three categories (goal, card, substitution) and are manually annotated with a temporal resolution of one second. The action spotting task requires to correctly predict the anchor spot that identifies an event. For instance, a ground truth spot for a card event is defined as the timestamp in which the referee extracts the card. Following previous literature, we use the Average-mAP as the evaluation metric, which accounts for multiple temporal tolerances. Given a temporal tolerance δ, we compute the average precision for a class by considering a prediction as positive if the distance from its closest ground truth spot is less than δ. The mean average precision is then obtained by averaging the AP of each class. The final metric is computed as the area under the mAP curve obtained by varying δ in the interval ranging from 5 to 60 seconds.